We dug out all our classic Big Band dance numbers to play at this charity event.

David in one of his first TVBB gigs and a great asset to the band.

Caroline with a fine solo

It was a privilege to be invited by Amanda Bolderson to play at the Queens Hall to raise money for the ‘Mark Bolderson Foundation’s set up in memory of her brother Mark.

This joint gig with the Tyne Valley Junior Jazz Ensemble and the Tyne Valley Youth Big Band was hosted by local comedy star Steffan Peddie, AKA big Keith in Hebburn, who entertained us all.

TVBB had the honour of playing with two of the regions top trumpeters, Mark Webb and Darren Irwin who joined us in honour of Mark.

Mask is sadly missed by us all. In March he was finally laid to rest by his family and friends in a moving boat trip on the Tyne, his ashes being scattered opposite the Sage, a place he loved.

Friend and fellow percussionist Jack Ruddick donated one of his drum sticks to be floated down the Tyne with Marks ashes.

Many thanks for our friends at Bebop Spoken Here for such a great review of last nights Gig.  We had a hoot!

Modest one-room pub + big band = a fun night out. Arriving at the Fox, Hexham Jazz Club’s HQ, it appeared a furniture removals business was in the process of clearing the place. Hang on…it’s the band rearranging the room! The pub’s usual bay window stage area would become front row seats for the evening as the regular seating was requisitioned by the band, that’s the twenty three-strong Tyne Valley Big Band.
The TVBB is a super-sized big band varying in number from one gig to the next. This Hexham Jazz Club engagement mustered a mere nine reeds (of which seven were female!), a paltry six trumpets (five in the section, MD Dave Hignett out front) and, had space permitted, there would have been a keyboard player working alongside the band’s rhythm section. The Pink Panther for starters, a tune the pub’s resident non-jazz fan (stationed at the bar) sheepishly conceded was a canny tune. Dave Hignett suggested he may not like the rest of the evening! In the Mood (arr. Doc Severinsen) with a flurry of soloists including Andrea de Vere on tenor and Kelly Rose, alto. Ray Charles’ Hallelujah I Love Her So, featuring a trombone blast from Simon Hirst (heard recently with the Bold Big Band), could have been any old internet download arrangement but not this one. MD Hignett made use of an invaluable regional resource to challenge and stretch the band by playing an arrangement by a well-loved bandleader, composer and arranger, the late Ray Chester. The Chester family donated Mr Chester’s vast library of arrangements to Sage Gateshead with the express intention that it was to be made available for occasions such as this at the Fox. 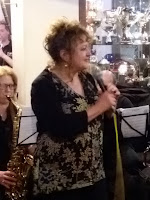 Band singer Barbara Hignett made a first appearance singing Route 66 then Sway (the audience did, sway that is). Uptown Funk (Mark Ronson, Bruno Mars) went global and the TVBB plays the number with gusto. The band is nothing if not prepared to turn its hand to anything. From Ronson to Sammy Nestico’s Feelin’ Free featuring the muted trumpet section and You Gotta Try.
Alto saxophonist Sophie Speed was Feelin’ the Funk as were Hignett, Kevin Moore, guitar, and a riffing band. Becky White emerged from the reeds to shine on Birdland , Barbara Hignett returned to tell us it was a Hexham Winter Wonderland which brought a close to the evening, except for a poignant finale. Earlier this year the Tyne Valley Big Band lost a friend and fine drummer when, at the age of 45, Mark Bolderson died. Mark suggested to Dave Hignett the band should play Gospel. They did, Mark got to play it, and this evening’s concert ended with the band playing it. On Dec 9th (Saturday) in Queen’s Hall, Hexham, the Tyne Valley Big Band will be taking part along with many others, including the Tyne Valley Youth Big Band and the Tyne Valley Jazz Ensemble, in a concert to help raise funds for the Mark Jon Bolderson Percussion Foundation. Tickets are available from the Queen’s Hall – telephone 01434 652477.
Russell
Dave Hignett MD, Ben Chinnery, Caroline Guirr, Andrew Guerin, Nat Haslam, Deborah Smurthwaite (trumpets); Becky White, Kelly Rose, Heidi Griffin, Matt Walker, Dianne Mays Andrea de Vere, Sophie Speed, Juliet Williams, John Knapton, (Reeds); Steve Quilliam, Simon Hirst, Dave Bradford Nick Brodin(trombones); Kevin Moore (guitar & vocals); Michael Cunningham (bass); Jack Ruddick (drums) & Barbara Hignett (vocals)

We were devastated by the tragic loss of our dear friend and talented percussionist Mark Bolderson who sadly died in August.

Mark was a huge influence in the band being such a talented all round musician and great guy.  The band were privileged to play ‘Gospel’ one of Marks favourite numbers at his funeral and to be invited play at the evening celebration of Marks life at Broomley Grange.

His family have set up the ‘Mark Jon Bolderson Percussion Foundation’ whose aim is to support and encourage young percussionists in the area.

TVBB will be playing at a fundraising evening in honour of Mark on 9th December. See calendar for info.

This photo of Mark playing at our last official gig of the summer proudly  playing front of the Greenside Miners Banner was sadly the last big Gig we did before Marks untimely death.

The band have had engraved a pair of drum sticks which we have with us at rehearsals to remind us of Mark.

RIP dear friend, sadly missed by us all.

We ended the summer gigs with a joint night of Jazz with our Junior and Youth bands in our spiritual home ‘The Phoenix’ who provide us with a great space to rehearse every week.

Jazz is thriving in Hexham under Dave Hignetts direction with some enthusiastic performances from the Tyne Valley Junior Jazz Ensemble and Tyne Valley Youth Big Band.

TVBB ending the set before a quick getaway to ‘The Valley’ for the now traditional curry and handing over of the Whisky to our MD Dave Hignett.

In July we stepped back in time to complete a week of celebrations of local Mining history in Greensides’ historic Community Hall.

Dances used to be held every week so we were proud to continue the tradition and had a lovely night.

Thank you to the National Trust for inviting TVBB to play at their popular ‘Picnic in the Park’ event at Gibside and for our first appearance at Seaton Delaval Hall during the summer. The weather could have been a tad less inclement at times!

Here we all are humming ‘In the good ole summertime’ avoiding a drenching.

Undeterred we managed to play most of our set. What a lovely setting!

Back for one of our favourite Gigs we had a great evening at Haydon Bridge Festival.

Unfortunately the band has now outgrown the stage but the Saxes were all in a nice longline for a photo. So thats all good. We were even graced with Kellys presence, all the way from Australia no less.

The boys on the back line battled with a flapping tent roof but played on regardless.

For once Kev (Guitar) was on home turf, and not driving, so was able to avail himself of some delicious red wine.

Here we see the ‘Lower ‘ Trumpet section enjoying a joke in the interval.

Thanks to Ally and Geoff the sound crew who always ensure a great sound at our local festivals.

A ‘Moochers’ eye view of proceedings

The sun was shining on us at big time at this years Tynedale Beer festival.

We were saddened to hear of the loss of Andy Deacon who had been a keen supporter of  the band since we formed.

Mark on Kit sweltering in the heat though looking remarkable composed

Mike laying down the groove as always.

Andrew trying to make a serious comment to our MD but realising the futility during a photo bombing opportunity for Mr Hignett, ‘relaxed’ after rehydration.

A tromboners eye view as the crowds build.

The ever ambidextrous Caroline proving her ability on Keys when not playing her trumpet, Kev enjoying himself also. and in fine voice.

We hope to be back next year!

We had a great afternoon on Monday playing to entertain the crowds at the Northumberland County Show, Bywell.

Here we see our MD Mr Dave Hignett photo-bombing our altos with a special appearance by Sophie, who is not from Australia.

Andrea unleashing a solo on the unsuspecting crowds

Mike sampling  a drop of Wylam Gold courtesy of our sponsors Wylam Brewery. (The rhythm section communicate with each other with a variety of hand and arm signals loosely based on the dance moves of the Village People).

It was great to welcome Dan back to the fold who flew in all the way from Barcelona specially for the occasion! Here we see the Tromboners all looking nicely relaxed before the frenzy that was ‘Sing Sang Sung’

Mr and Mrs Moocher, no relation.

No MUD this year so that was all good.